Fruit of the meeting between Larry Page and Sergey Brin, the giant Google is undoubtedly a major figure in the computer world and, what is more, the SEO sphere. It is also the most widely used search engine in the world and enjoys unparalleled popularity.

An ambitious project that started in the mid-1990s

It all started in 1995 at Stanford University with the meeting of two promising young American students: Larry Page and Sergey Brin. A year later, it was the launch of BackRub, their first search engine then hosted by the university’s servers. BackRub thus analyzes links pointing to a website. The only concern was the excessive consumption of bandwidth, which prompted the two geniuses to take charge of their project in 1997. That year, the project was renamed Google, derived from googol and meaning 1 followed by one hundred zeros. A lack of means will lead the two partners to assemble several less powerful machines in order to connect them in networks between them.

Serious things started in 1998 with an initial investment of $100,000 by Andy Bechtolsheim (co-founder of Sun Micro Systems) and a move to Mountain View the following year. This is followed by a new fundraiser amounting to 25 million dollars. The number of searches per day reaches the fateful mark of 3 million, thus attracting advertisers by the thousands.

The keys to the company’s success: innovation and diversification

If success is there with more than a billion referenced pages, the search engine innovates from the 2000s with Google Adwords. This famous platform offers a targeted advertising system based on keywords and brings together 350 customers at the time. Another advantage of the search engine is its availability in 10 new languages.

A year later, Eric Schmidt was appointed as the company’s first CEO. The company’s offices are found all over the world, particularly in Europe and Asia. Similarly, Google Images was created in 2001.

Google truly became an international brand in 2002 with the signing of a contract with Boeing allowing the exploitation and archiving of private internal data. AdWords enjoys better accessibility thanks to the new cost-per-click system developed by the company.

Since 2003, Google knows a meteoric rise, it is the creation in particular of Adsense and Google news. But the most significant event remains its IPO the following year. Its capitalization is then evaluated at 50 billion dollars and the giant surveys an income of nearly 850 million dollars. This is followed by the launch of Gmail, which ousts Caramail, and Hotmail, which is experiencing growing success. Another piece of information concerns the birth of the Googleplex, the company’s current headquarters, which accommodates some 800 employees of the company.

In 2005, it was the advent of geolocated research with the launch of Google Map which will subsequently evolve as a real GPS.

In 2006, the giant opted for the diversification of its services. Internet users can notably retouch their photos with Picasa, obtain information on the stock market with the Finance application, analyze research trends with Trends or benefit from the Calendar or Books services. The same year, the brand appropriated the other star of the web: Youtube.

Since 2010, the brand is attacking browsers with the creation of Chrome through Firefox services in particular. Success is not long in coming, browsers are then nearly 60% to borrow it. In 2011, it was the creation of Google Art Project which allows the viewing of hundreds of works of art in high resolution. This year also marks its first steps in social networks with Google Social Search. However, nothing dethrones Facebook.

A phenomenal success that does not escape the competition

If Google is to do research, it is also a real advertising showcase: the engine sells advertising on its services. Its action allowed it to reach more than 50 billion in turnover in 2012, a remarkable figure when you consider that it has more than 90% market share in France.

If all goes well for Google, the search engine does not forget the mobile trend, to say the least. However, advertisers are reluctant to fund mobile searches at the same level as traditional search, which has an impact on the click-through rate. Despite this fall, the brand still enjoys the same success. To face Apple, the giant has launched the Android application which is particularly effective. However, the clientele is different and undecided to buy on mobile. Clearly, Apple is a strong competitor.

Google is on all fronts and leaves no respite to its direct competitors. The relentless machine is growing every month and it is hard to see what could stop it.

The following infographic puts into perspective the results of Google on key areas of its activity: search engine, online advertising, and mobile market. The numbers are irrevocable. A few years ago, for example, Internet Explorer was thought to be unbeatable despite a challenger on the rise: Mozilla Firefox. Today exit these two browsers, the leader is called Chrome. Google is also fighting over the mobile market and sees its mobile operating system crushing all competition. Even Apple had to give in. The next step will be played on the number of mobile terminals sold, Google now offers its own smartphones and tablets. Only downside, facing Facebook. No frontal confrontation. Because if Google dominates the advertising market, Google+ is still struggling in the social network market. 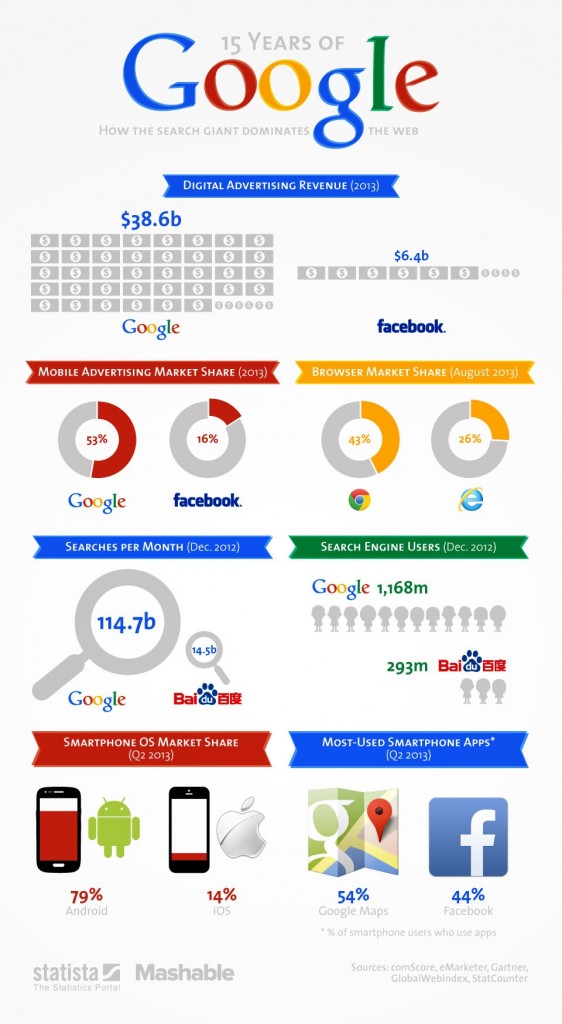 Google goes all out to support its social network: Google+

The American giant believes in its social network. The latter is struggling to develop and despite the figures put forward by Google, it remains very unattractive for the majority of Internet users. In 2013, Google is moving up a gear to motivate the use of its social network.

Strong measures are taken. When a Google Mail address is created, it is automatically accompanied by a Google+ account. Google Places is migrated to Google+ Local. To benefit from the display of an author’s profile directly in the search engine under its publication, it is necessary to go through the association of the site and a Google+ account. Finally, all comments from Youtube, Google’s video platform, now go through Google+.

These practices have provoked the discontent of some, feeling forced to adopt a network that they did not want. It will still take some time to measure the impact of these measures, but it is certain that Google was established and is now placing a lot of hope in its social network.

Google and the fight against spam

Google ‘s business model is largely based on the revenue generated by its Google Adwords advertising network. Only, the visibility and the interest of this advertising solution made in Google itself depends a lot on the Google search engine (and its popularity). All of Google’s work to make its search engine more efficient, relevant and modern is carried out in order to capture ever more users while keeping its current base. Also beware of online scams.

This battle that Google is waging so that its search engine remains the most relevant on the market passes through an emblematic figure: the head of the fight against spam at Google, Matt Cutts. In a very smart communication strategy, Google, through Matt Cutts, communicates very regularly via small videos in the form of question/answer.

Can Get Online Magento 2 QuickBook Integrate?

The Problem With Human Intelligence and Biometric Authentication Techniques

Tableau Reporting: Become Skilled in the Creation of Reports and in the Analysis of Data

Python For Machine Learning And AI

What Are The Latest DevOps Trends?

What is a Floor Trader? How does Floor Trading Work?

PS5 vs Xbox Series X – Which Gaming Console is Best?

Keep These Documents Ready To Avail A Two-Wheeler Loan Online

Why Is On-Demand Content the Unsung Hero of Webinars?

How Can You Boost Your Email Marketing Campaigns